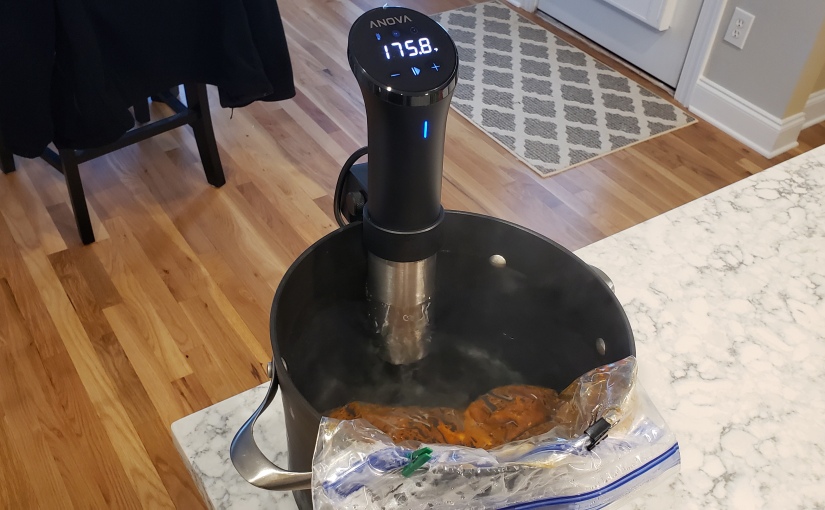 It didn’t exactly go smoothly, but the resulting sous vide tacos were enjoyable!

I jut had a birthday; ughhhhhhhh, my 40th birthday. But birthdays are cool because I like getting presents. And as far as presents for my 40th are concerned, my in-laws Jerry and Ellen got me a pretty damn cool birthday present; a 1000 watt Anova Precision sous vide immersion cooker.

Sous vide is French and translates to “under vacuum”. Typically, a food item is vacuum sealed or placed into a zipper locked bag, submerged in a bath of water, and the water is heated to a desired temperature with an immersion cooker. This is a method of cooking I have been interested in trying for a couple of years now. What appeals to me about the sous vide method of cooking is the ability to be able to prepare a steak to the exact level of finish desired, and then sear it off for a nice caramelized exterior. In other words, you can get a perfect medium rare steak from crust to crust!

I basically destroyed my kitchen preparing this dish from a recipe found on Cook’s Illustrated. I think it actually took me longer to clean up than it did to prepare the recipe for the sous vide cooking!

Once I had the chicken prepared for the sous vide part of the adventure, things started not going that smoothly for me with my new Anova Precision. One of the main features of the Anova Precision is the ability to connect to and control the cooker via an application on a smart phone or tablet. This turned out to be a bit of a headache, and I was unsuccessful at pairing my phone to the cooker. As time started getting tight on getting dinner done in time for the evening I went manual, using the controls on the Anova Precision itself. This also proved a little troublesome due to the lack of detailed instructions and my lack of familiarity with the cooker. For some reason, several times during this cook, the Anova Precision shut off or stopped for no explicable reason (other than maybe I didn’t know what I was doing). However, later in the evening I discovered the Anova Precision isn’t compatible with WiFi networks that are using a network password containing a special character. Adjusting my network password solved the problem, but in my opinion this quirk is pretty damn ridiculous. Come on Anova! Fix this!

But how was the food, right? It came out pretty good! After three or four hours slow cooking at 175°F (it’s hard to tell how long it went with the issues I was having), the chicken came out of the bag very moist and tender in the tinga de pollo sauce. It shredded very nicely with a couple of forks and was very flavorful on soft tacos.

I topped my tacos somewhat traditionally, with cilantro, onion, avocado, and some queso Cotija. While they were good on flour tortillas, I would really like to try them on a corn tortilla!

Let’s throw something fun on the smoker!

During weekly meal planning with my wife Stacey, she asked me if I wanted to make something for dinner on my kamado grill. My mind got to thinking about what we had on hand, and I remembered that Stacey had picked a lot of jalapenos and some sort of long green pepper from her garden this summer that we had stashed in the freezer along with 1lb portions of chicken breast. An idea popped into my mind and a dinner was planned! Sauteed peppers, provolone, rolled up in chicken was going on the menu!

I’ve done these rolls before, and they are great with either chicken or beef. But to start, you need some peppers. I added a red bell pepper to the mix for it’s flavor and to add some color. The peppers, along with some onion, were finely diced and sauteed in butter until the onions were translucent and the peppers soft. I did de-seed the peppers, except for the jalapenos, as I wanted a little heat on them.

The next item to prep was the chicken. I selected two chicken breast, approximately 1 lb each, trimmed any fat from them, and pounded them with a meat tenderizer until relatively flat. If you do this, make sure you cover the chicken with clear plastic wrap so that you don’t get little bits of chicken and chicken juice splattering all over your kitchen.

Once the chicken was flattened out, I arranged it on some clear plastic wrap, slightly overlapped, so it could be easily rolled up. I then selected a BBQ rub from the pantry to sprinkle on the chicken. I went with Fox Bros. BBQ’s rub; they have a restaurant in Atlanta, and their brisket chili is AWESOME (especially on tater tots). This rub is sold in local grocery stores, but any BBQ rub that suites your tastes would be great to use!

Next comes the cheese! Any cheese can be used; I went with provolone because I enjoy the flavor when it’s melted up with the peppers. Simply just slap down slices and try to get some good coverage on the chicken. I left a little space at the top of the chicken free to overlap once it was all rolled up.

And the last thing needed before rolling up the chicken is the pepper mixture. I simply spooned it over the cheese and spread it out evenly.

Rolling the chicken up can be a little trying on the patience, but having the plastic wrap to help, and butcher’s string pre-cut and ready, makes it a little easier. Once you have a decent roll, tie it up with the string to help it hold its shape. I also sprinkled the outside with more of the Fox Bros. BBQ rub.

I prepped the grill with lump charcoal, and pieces of whisky barrel staves from Jack Daniel’s Distillery. The smoking wood from Jack Daniel’s was a Christmas gift from my wife that I was waiting to use for a special meal. A ceramic diffuser was used to keep the direct heat away from the chicken roll.

I’m using a BBQ Guru CyberQ bbq controller with my Vision Kamado Professional S Series kamado grill. The CyberQ makes maintaining and following your cook super easy. In fact, I was able to monitor the progress, on my phone and laptop, while playing Call of Duty on my Xbox!

I wrapped the finished chicken roll in foil, and then in several towels, before dropping it into an empty cooler to allow it to continue to stay hot for a little. A short time later, it was ready to slice and serve! I made up some cheese rice from Knorr to go with it; it was all great!